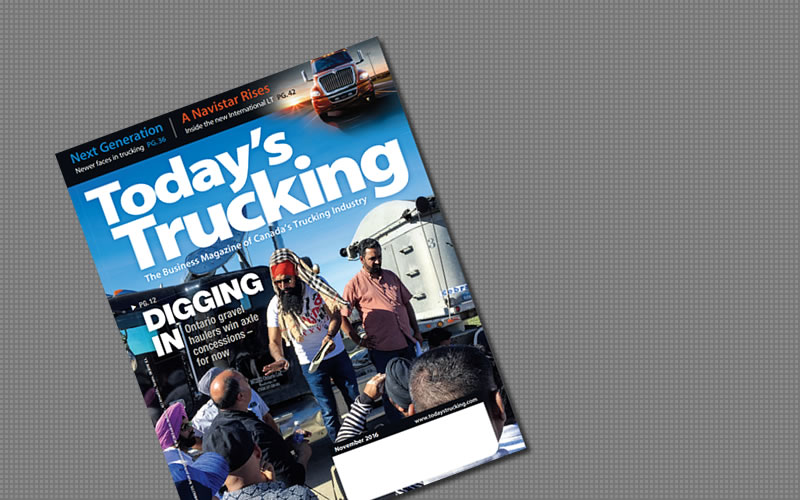 Milton, Ontario seems to have become ground zero in a prolonged battle around provincial weights and dimensions. Aggregate haulers occupied the locale’s inspection stations as far back as 2012, arguing against axle limits imposed under what’s become known as Safe, Productive and Infrastructure-Friendly (SPIF) rules. For its part, the province agreed to take a softer stance on enforcement, and everyone went back to work.

It was a truce that lasted several years. If truck axles were too heavy during a first pass over the scale, operators were reportedly given the chance to adjust equipment or call mechanics. Information about how to meet the SPIF rules was passed along through meetings and printed material alike.

But the tickets returned this August; the protesters were back in September.

Aggregate haulers who had organized at a Sikh temple in nearby Brampton began pulling into the Milton inspection facility next to the eastbound lanes of Highway 401 at 2 a.m. on Tuesday September 20. For the remainder of the week they occupied three ministry scales, picketed nearby quarries, and even slowed traffic in the western reaches of the Greater Toronto Area before ending the job action on Friday night.

“We just want a solution,” said Jagroop Singh Bangli, a two-truck owner-operator who was involved in organizing the fight. “We don’t want to take any more tickets.”

Their wish has been granted. For now. Enforcement teams have returned to the focus on gross vehicle weights while the search for a long-term solution continues. “This includes enforcement of allowable gross weight limits behind pre-set tolerances and thresholds, and the detention of vehicles found to be grossly overloaded,” Ontario Transportation Minister Steven Del Duca stressed in a statement. “Vehicles will not be permitted to operate above manufacturers’ Gross Axle Weight Ratings (GAWR), Gross Vehicle Weight Ratings (GVWR), or Tire Load Limits.”

The protesters found support from the Greater Ottawa Truckers Association and about 280 producers at the Ontario Stone, Sand and Gravel Association. But not everyone has problems with the rules that allow for some of the heaviest gross weights in North America.

“Most carriers are compliant members of the business community, and most shippers are committed to following the rules,” said Stephen Laskowski, president of the Ontario Trucking Association. Even aggregates are being moved without overloading axles. “The Ontario Trucking Association wants the province to implement an enforcement system that will hold all members in the supply chain accountable for the overloading of vehicles, including those loading the vehicles and those owning and operating them,” he said.

Enforcing shipper liability laws and requiring the holders of government contracts to meet the axle-specific rules were referenced as good places to start.

The challenges are not limited to the way equipment is loaded, though. Many tickets around Milton can be traced to aging highway tractors that have been repurposed for the job. The steer axles can’t take enough weight, no matter where a loader dumps the sand and gravel. Mismatched fifth wheel heights won’t allow the loads to equalize, and self-steering axles are often undersized.

But Ron Barr, general manager of the Greater Ottawa Truckers Association, agrees with a suggestion by protesters that quarries should, well, share the load when it comes to any penalties.

“We’ve got to hold those that load us accountable,” he said, echoing complaints that truck operators pay weight related fines while quarries profit. If a quarry adds an extra four to five tons of payload on each truck, every fifth load is essentially free, he added.

Driver have two choices if they think that’s happening, Barr said. Complain and be sent home without work, or take a load and risk being stopped at the scale.

Still, he doesn’t want to sacrifice potential gross weights in the push to meet axle-specific loads. “If I’m going to spend a quarter of a million dollars on a truck, I’m going to get every ounce I can on that truck because a lot of guys are running ton-mile rates. It’s incumbent upon them to capitalize on the investment,” Barr said.

Bangli and his peers will escape some of those challenges for awhile. “We really want to be thankful to everyone that has supported us,” he said, referring to the September protests. “Let’s see what’s going to happen now.”